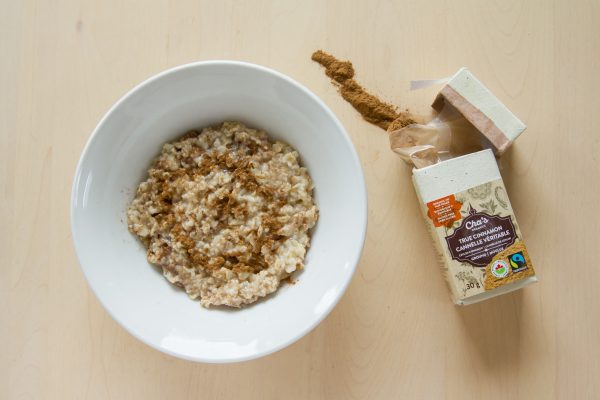 I’m loving Cha’s Organics right now (and add their delicious cinnamon spice to my oatmeal every morning). Here’s why.

Caring For the Environment & Its People:

I’ve recently been looking into companies more to see which ones are better for the environment. Cha’s products are obviously organic but they’re also ethical trade, which is so great. Their products come from small scale, family owned, biodiverse farms. In addition to spices they also have coconut milk, beverages, and crazy cool tropical fruit.

Baby mango trees being carefully tended to by smiling women in the middled of an eco-friendly, biodiverse fruit orchard. Vibes don’t get any better than this. So proud to be a part of this story. 💛🌿

You Had Me At Elephant:

The people who work for the company are kind, family based, and hard working. They also give back. They donate 1% of all their coconut milk sales to help protect Sri Lanka’s wild elephants.  That’s 1% of sales, not just profits. They help the farmers co-exist with elephants in a safe environment, so elephants don’t get harmed. Spending time in South Africa every year, elephants are dear to my heart (they’re my favourite animal, hands down), so I love this initiative. Cha’s Organics has been one of our awesome sponsors for several of our health and wellness events. One such event was called Spicy Summer, so how could I not have them as a sponsor?! Cha’s generously provided 30g packages of different spices for each attendee. At another yoga & wellness-filled event, one lucky attendee won a prize package of spices. Here’s a cool video for you to see the people behind Cha’s and where their spices are from. You’ll go deep into the heart of Sri Lanka – it looks beautiful there! Seriously, this video made me want to travel there.

Plus you’ll learn about what real cinnamon is like, not the fake kind that we often get in Canada (hint: the real stuff is softer and breaks easily!). The cool info about cinnamon starts at about 19:40 in the video. Yes, the video is on the longer side, honestly I started watching it with the intention of just watching a few minutes, but I found myself watching the entire thing & learned a lot!

Their packaging is also cool – the spice boxes are recyclable. When you open it up the spice is inside a small plastic package, but that too can now be recycled in Vancouver! Just go to the Zero Waste Centre where you drop off soft plastics. I love what Cha’s is doing. They’re such a great Canadian company, I highly recommend their products :). You can find them at Choices Market in Yaletown, or order them on their website. Most Sunscreen Is Bad For Marine Life
Will Insect Protein Be The Next Big Thing?
Going Local: BC Blueberries Event