Experiencing A Prenatal Massage For The First Time
Close 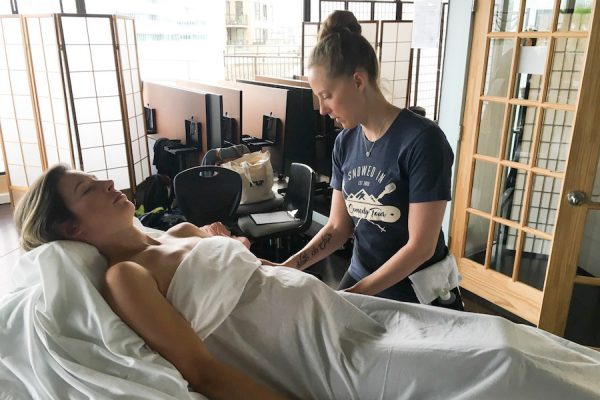 When asked if I wanted to come for a prenatal massage at an RMT school my initial thought was, will it hurt the baby? I knew I was probably overreacting, but I’d heard reports about avoiding certain types of massage while pregnant, so the worrywart in me was whispering fears into my over active brain. Turns out I shouldn’t have been worried at all. They’re awesome. Go.

If you’re having any pains at all while pregnant (or even if you’re pain-free) your body will be in bliss. I’ve been struggling to sleep because of aches and pains throughout the night (mostly my hips), so I figured it’d be good for me. It was. The teachers really knew what they’re doing, and so did the students. If you’re feeling at all achy or tense (um pretty much all of us even if we’re not pregnant – gotta love being hunched over desk jobs all day), don’t hesitate.

My massage at the Langara Holistic Health Studies school for RMTs (registered massage therapists). Not sure what getting a pregnant massage during a class is like? Picture yourself in a room with a dozen or so other mamas-to-be, all lying on a bed, nearly falling asleep because you’re so relaxed. Not a bad way to start the morning.

I should add that we first had to fill out an assessment form. The usual stuff. They wanted to know things like how we were feeling, what pains we were having, any relevant family history, and when we were due.

Then Paula Jaspar led the class. She’s had some twenty years of experience as an RMT, and you could tell. She was so calming, kind, and knowledgeable. She’s been quoted as saying, “A pregnant woman is a woman of excellence” so what was not to like about her? She welcomed us with a comforting smile, then got all the studying RMTs and mamas-to-be to introduce themselves. It was cool to be around so many other pregnant women, and I appreciated being able to hear how they were all doing, how far along they were, and what they were experiencing. One woman was due in a few weeks, with twins! Another was so sad she hadn’t heard about the space earlier, she was scheduled for a c-section the following week, but she worked upstairs! Fortunately, they offer the program for both pregnant mamas and postpartum for awhile after you’ve given birth too.

Then we got into the massages. My student massage therapist was Suzanne Malinowski-Paquin, and she was great. She’s studying to be an RMT but is already a Certified Bodyworker and Reiki Practioner & Teacher, so she knows her stuff. First she went over my assessment to see how I was feeling and what areas I’d want her to target. My shoulders, back (although I didn’t realize it until she started), and hips were the most sore or stiff, so she focused on those areas, but also did my calves, and even my feet. She used a light fractionated coconut oil to lather her hands, and massaged me while I lay on both my sides, and then while I was raised up on my back for a short period.

In order to get me into the most relaxing positions she carefully adjusted a lot of pillows to get me comfortable. As I lay on my side she placed two in between my knees, one under my hip and side, and one by my chest, for me to rest my upper arm on. It felt great. I’m so glad she introduced me to new pillow positions – I’ve since started sleeping while hugging a pillow like that, it feels so much lighter and more comfortable. For all the pregnant ladies out there, give it a go.

Lying on my side, she massaged my shoulders, neck, and back. I felt myself melting into the pillows, it was sooo relaxing. She also worked on my hips to loosen them up. Any other pregnant gal on here get sore hips from sleeping on your sides? I’ve been constantly tossing in bed because of the pain, so getting massaged there was a big relief. It was also fascinating to learn about the massaging as it was done – Suzanne said, “The body tissues feel different in pregnancy compared with regular tissue, due to the hormones in the body. It feels like working with taffy!” Pretty crazy. Things are definitely changing in our bodies.

When it was time to flip onto my back I was a bit nervous, because everyone tells you avoid going on your back, you’ll hurt yourself and/or the baby. But Suzanne and her instructor quickly put me at ease because they gave me what seemed like a ton of pillows to prop me up, so I there wasn’t any pressure on my back at all.

Suzanne asked me if I’d be up for having a belly massage. I was a bit nervous because I didn’t really know what that would entail, so I asked her how much pressure I would feel on the stomach. Instead of putting her hands on my belly she took my arm and gently massaged it, saying, “It would be this much” which was very light. I was impressed that she showed me elsewhere first to put me at ease, and it was so light and soothing I had no issues at all with it. She then gave me a gentle belly massage which was fun. I think the baby liked it too 🙂

I could have stayed there for ages getting massaged, it felt amazing! I also had to try really hard to stay awake because it was so relaxing, but I really wanted to be present to experience the whole thing.

Suzanne was amazing. You can find her here at restorativemassage.ca.

Langara’s program offers Monday massages to pregnant women for $20 (50% off), and on Saturday’s they’re also 50% off to anyone who brings in nonperishable food. Try it out! You’ll love it.

Why We Should Spend Time In Nature
Want To Be More Eco-Friendly? Check Out Your Local Farmers' Market
What To Expect In A Prenatal Yoga Class

2 Comments on “Experiencing A Prenatal Massage For The First Time”

I am so happy to hear you had a positive experience during our pre-natal class! I am the Langara RMT Program Clinic Coordinator and loved reading your post! We are so proud of our students and the good work that they do!

I’m so glad you enjoyed reading it! My experience was wonderful, your staff and students are excellent. Thanks for providing such a great program!