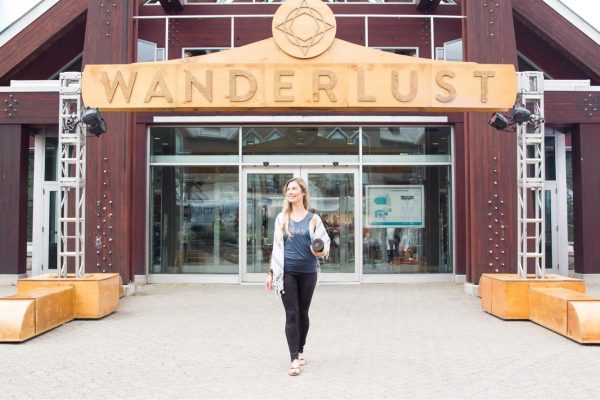 What the heck is Wanderlust Whistler all about? Read below to find out about my experience this year…

For those who’ve never heard of it, get with the program! Just kidding, I’m sure not everyone knows about it. But if you’re big into the yoga scene it’s probably something you’ve dreamt of going to. It’s a yoga festival held all over the world, and obviously this particular one was right in the heart of Whistler village.

So how was Wanderlust? It was awesome again (I was lucky enough to go last year with Adidas, the Westin, Natalie Langston, and Wanderlust).

So much yoga, so many good vibes. It was, however, a little quieter than last year. In 2017 it seemed that all of Whistler was buzzing with yogis, but this August the stretchy pants were definitely more sparse throughout the village. Still, it was a blast. It was a weekend filled with yoga classes, lectures, dance parties, vendors, food, meditation, and good vibes. Here’s what my experience was like.

Natalie Langston and I drove to Whistler from Vancouver and arrived just in time for our schedule events (a big thanks to The Four Seasons Whistler for dealing with our car & luggage while we raced to make our first classes). We jumped right in.

I went to a session called “Do you want to be right or happy” led by Jonni Pollard. What did I learn? (Green Lake, where the glacial water definitely woke up my senses!)

Next I went to “Awake”, a yoga class taught by Chelsey Korus.

Chelsey is a powerhouse of a teacher. If you ever get the opportunity to take one of her classes I highly recommend you do so. I took one with her last year, and was excited to do so again. It was inspiring, and definitely made me feel AWAKE (we got our bodies moving for sure). One drawback, it was in a smaller room this year, so it got VERY hot and sweaty. The heat made me quite dizzy at times, so I struggled through parts of it. I couldn’t help wondering why we were in a smaller room this time, was it because fewer tickets had been sold this year? Did it have anything to do with Lululemon not being a sponsor this go around (correct me if I’m wrong, but I believe they were a sponsor last year)? I hope they keep in mind the air flow situation next year! We gotta get in our flow state, right? 😉

One very cool addition to the class was that DJ Jesse Blake played awesome tunes throughout. I LOVE doing yoga to live music or djing!

After class I met up with Natalie & we checked out our hotel, the beautiful Four Seasons Whistler. We’d been upgraded to a top suite (whoohoo!). What a view. (Chilling on our balcony, sporting a Karmala Designs tee) This spot was so cute! We also grabbed our gear from Karma Collective & Karmala Designs (clothing & jewellery). They were two of the great vendors for Wanderlust – love their stuff! We made sure to take some photos in our gear, and toured around the village before getting some dinner at Earls. We’d had a busy day so we crashed early, heading off to bed. Little did I know, the silent disco was on in the evening – I was so sad I missed it! For some reason I thought it was on Saturday night, boy was I kicking myself for that. It’s a big dance party where you listen to different djs through headphones. I heard from others later that it was a lot quieter this year, but still fun. I’ll make SURE not to miss the disco next year! It’s one of my favourite events! (Playing in the wilderness in my Karma Collective tee)

In the morning, Natalie and I went on a music meditation hike. It was lovely. We walked for 20 minutes or so, then sat on a huge rock above a stream, surrounded by wilderness. Garth Stevenson proceeded to play the cello, with the sound of the birds and rushing water behind us. Bliss. Then we walked back along the stream. How cold does that water look!? Next I went to Yogathlete – led by Caley Alyssa

When I read the preview for this class I knew I better take it: “Guided through a unique warm-up with a dynamic stretching sequence which focuses on opening tighter areas of the body like hamstrings, quads, shoulders, and hips while building stability in important joints like the ankles, knees, hips and shoulders. Bring it all together with deep static stretching to take your heart rate down, cut your risk of injury and lessen muscle soreness.”

She definitely focused on preventing injury. She ALSO stated how yoga is wonderful, but it misses some key things, such a internal rotation. Yoga focuses so much on external rotation, but isn’t balanced enough, so she did a bunch of internal rotational movements and stretches.

We also worked our glutes a lot, as they tend to be underdeveloped (mine certainly are compared to my quads!)

DJ Jesse Blake played tunes during the class which was awesome.

Light Watkins is great. He mentioned something hilarious to me – you don’t go to a yoga class in the morning and tell a friend that you brushed your teeth that morning, and it made you feel great (yet that’s exactly what we do when we meditate “I meditated this morning!”). He wants meditation to be like that eventually, where we don’t even feel a need to discuss it. It’s just like brushing your teeth, you simply do it.

We ended off with about 8 minutes of meditation – where I may have nodded off a couple of times (ok, I definitely did), BUT he had mentioned beforehand that if you feel you need to sleep when meditating, then let it happen, just let it be, don’t force anything. So I was ok with it. And afterwards it turned out I wasn’t the only one, which made me feel even better 😉 We hung around the village area to listen to live music at the Olympic Plaza, and were surprised by a beautiful rainbow. It happened to be Pride weekend, how appropriate :). I decided to roam around the village a bit longer and ran into Cordia Chan of Karma Collective and Michelle Hurley of Yoga Design Lab. We got a bite to eat then checked out the dj’s playing (when I thought it was the silent disco, but I was sadly mistaken!) In the morning, Natalie and I ventured over to the stunning Green Lake (my feet were icicles though – oh the things we do for the gram…).

Next up: The Morning After – Seane Corne class

Then we went to another yoga class which was a typical vinyasa flow, with a lot of sun salutes A and B asana movements. It was therefore a lot of repetitive movements (chataranga for days), and with a shoulder injury I had to avoid all the chatarangas and just do my own thing.

Seane Corne was great though, she has a great soul, and had some interesting and enlightening messages during her class. Here’s the gist, which is a good reminder:

At the end of the class Beautiful Chorus sang Hymns of Spirit & Mantras in Love, in absolutely BEAUTIFUL harmony. The mantras in love were “Be Here Now”, which was such a lovely reminder to live in the present, and “Love is All There Is”.

A beautiful way to end classes!

Thanks so much to Wanderlust for having us! It was a lovely event! (We got spoiled by the staff at The Four Seasons Whistler hotel…yum! Thank you! This was waiting for us in our hotel room)

Thanks to the Four Seasons Whistler (Natalie taking a picture of the beautiful view!)

And thanks to the great vendors like Karma Collective & Karmala Designs. The Adidas tent was lovely, especially by the Olympic plaza music.

(All photos of me taken by Natalie Langston) PS Are you thinking about going to Wanderlust? GO! It’s so worth it. You meet so many great people who are high on life, you learn a lot, and experience new things.

Make sure to pack: Who's Coming To The First Event Of The New Year?!
New To Yoga? Here's What You Need For Class
If Your Entire Yoga Class Jumped Off A Ledge, Would You Do It Too? Why You Shouldn't Always Do What The Instructor Says

Thanks, it is very informative

Thanks, glad you found it helpful!