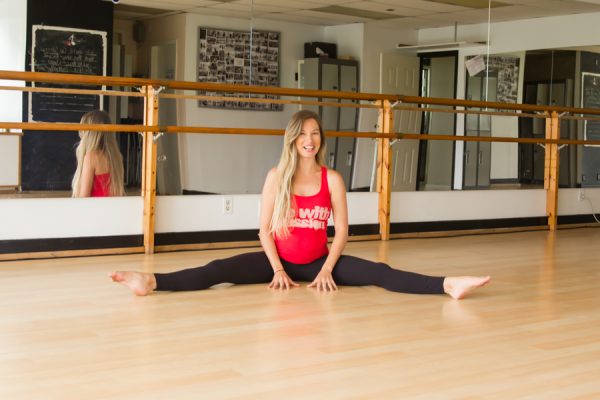 I’m sure it varies for every mama-to-be, but here’s my experience so far.

I’m 27 weeks pregnant, which is about 6 months. So I’ve still got a few to go. Feeling good so far 🙂

I felt crappy. Like really crappy. I only threw up a few times, but I was ALWAYS tired, and nauseous a lot. Probably because I wasn’t eating much. The smell of basically any food completely turned me off. Especially meat. Ugh.

So needless to say, I wasn’t very active. In fact, the only thing I could really do much of was go for walks. So that’s what I did. Walking is great for you when you’re pregnant (well, any time, really), so I was ok with that.

By the end of the first trimester I was starting to feel a bit better, mainly because I learned that as long as I ate every couple of hours I could stave off the nausea. It was around this time that my doctor suggested I try to walk about 30 minutes a day. So that’s what I did (for the most part, sometimes less, sometimes a lot more).

As soon as the second trimester rolled around I felt waaay better. It was like night and day. And like clockwork. Pretty cool.

I got back into working out, practicing yoga, dancing, and even subbed a bunch of dance classes. (NOTE: I subbed some kids dance classes as well, which were fun, and the kids were super cute, but boy was it tough to maintain enough energy for 3 year olds! Damn those kids can move! Things I have to look forward to in a few years…)

One thing I did notice was that my body felt different. I could feel my stomach muscles so much more than usual. It’s the craziest thing. That’s because your muscles are literally getting stretched out during pregnancy, to make room for the baby. So certain things felt way more intense, like any oblique work, or ab exercises. I still managed to do them, but I was a lot more cautious about what I was doing. I definitely avoided sit-ups because was a bit too much crunching on the stomach.

By the end of the second trimester I’d really scaled back on dance, because there’s a lot of bending a twisting that you can’t do while pregnant. It’s ok to bend, or twist, but not so much at the same time. There was also a lot of up and down movements which sometimes made me light-headed – another thing to avoid.

I also avoided exercises on my back (so as not to squish the baby, my organs, and blood flow). So instead of doing sit-ups, I’d lie on my elbows (so you’re propped up) with knees bent, then lift one leg, then the other, or both if it felt ok. Most times, and especially later into the trimester, lifting both legs felt like too much. It wasn’t that I couldn’t do it, but it felt like it wasn’t good for my body.

I still used weights (light ones), and did a bunch of other exercises. Here are are few go-tos of mine. If you’re not sure how to do any of these just type the name into google, they’ll come up quickly

If I did go a little too hard I wouldn’t necessarily feel it right away. Only after finishing my workout or dance class, once the endorphins and heart rate had decreased, did I notice discomfort. So I learned to be quite in tune with how my body was feeling while I was working out, so as to not go too far and feel it later.

I also get a short of breath a little faster than I used to. When you’re pregnant your blood volume increases, and so does your heart rate. This is to help the baby get more blood and oxygen, but can cause shortness of breath or light-headedness for the mama. If you feel that, ease up.

The same goes for yoga.

I’m still doing everything right now, just less intense. I don’t hold always yoga poses as long, and I use props to helps me more (see my post for more on this here). I also avoid shavasana (“final resting pose” where you lie on your back and close your eyes at the end of class) and instead lie on my side or sit comfortably to meditate.

Really pay attention to what your body is telling you. And when in doubt, if it doesn’t feel good, don’t do it!

We’ll see! That starts next week for me. Check back for updates on how it’s going!

Check out my post on 7 essential exercise videos to ensure the health of you and your baby.

Have any specific questions? I’m all ears! Or did you have a very different experience? I’d love to hear about it!

A Full Body Stretch Routine
If Your Entire Yoga Class Jumped Off A Ledge, Would You Do It Too? Why You Shouldn't Always Do What The Instructor Says
Hunched Shoulders: Two Exercises To Improve Your Posture